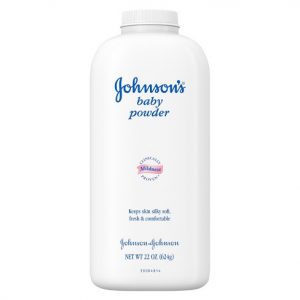 We tend to think of Johnson & Johnson’s Baby Powder and Shower to Shower products as common and safe household items to be used to prevent dryness and rashes in a variety of applications. However, these common household products contain a dangerous substance known as “Talc” or “Talcum Powder” which have been shown to be associated with the development of ovarian cancer when used regularly near a woman’s pelvic region.

After analyzing a number of studies, including some which reported as high as a 30% increase in the risk of developing ovarian cancer for women exposed to talcum powder on a regular basis, the International Agency for Research on Cancer (IARC) has classified the perineal (genital) use of talcum-based body powders as “possibly carcinogenic to humans.”

Studies have concluded women using talcum powder in their genital region on a regular basis have as much as a 30% increase in the risk of developing ovarian cancer. – International Agency for Research on Cancer

If you or a family member has developed ovarian cancer after prolonged use of talcum-based body powders, such as Johnson & Johnson’s Baby Powder or Shower to Shower products, you may have a valuable legal claim. Contact us today to speak with one of our attorneys about this issue.