Sexual Violence and the Myths of Victimization 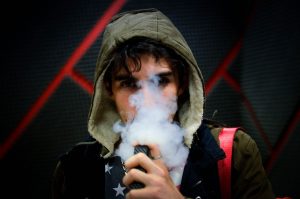 E-cigarette users are more likely to have cardiovascular events, according to an observational study, although the influence of co-smoking and causality remains a question.

People who reported vaping, compared with those not reporting any e-cigarette use, had higher risk adjusted for age, sex, and BMI in the National Health Interview Survey analysis of the following:

Daily users generally had higher risk point estimates than those who vaped on some days, but the MI risk was significant for both, said Mohinder Vindhyal, MD, of the University of Kansas School of Medicine in Wichita, at a press briefing ahead of presentation at the American College of Cardiology (ACC) meeting in New Orleans.

“It is an important finding that electronic cigarette users have elevated health risks.”

“It is an important finding that electronic cigarette users have elevated health risks,” commented Michael Ong, MD, of the University of California Los Angeles. “How much is due to co-incident use of regular cigarettes is not so clear, and further research would be needed to quantify further the overall level of use of traditional cigarettes and electronic cigarettes, as this analysis was not designed to answer that question.”

Vindhyal pointed out that about one-third of the e-cigarette users also smoked among the 96,467 respondents on the CDC’s National Health Interview Surveys from 2014, 2016, and 2017, when questions about e-cigarettes were included.

Nationally, e-cigarette users account for about 2.8% of the population, with current smokers and former smokers both comprising about 20% of that number.

Subanalyses got into small numbers of e-cigarette users after trying to exclude any smoking along with other variables controlled for, with only about 500 respondents, Vindhyal cautioned. “With those 500, we could not get any meaningful data or outcomes or associations.”

“The other important confounding factor is that among those 500 exclusive e-cigarette users, most were probably ex-smokers. There may be some long-term risk from previous smoking, thus history of smoking tobacco cigarettes and time from quitting smoking also need to be taken into consideration,” Goniewicz noted.

Still, it’s meaningful that there is risk associated with the way most people are using e-cigarettes, he suggested.

“What we’re trying to see is if they are as safe as the public health organizations are saying, or is it even associated with other cardiovascular outcomes,” he said, while noting that the study could only find association. “Obviously, one has to look into much more longitudinal outcomes studies to actually find the causation.”

Notably, self-reported depression, anxiety, or emotional problems were 2.2-fold more common with e-cigarette use, which exceeded the risk seen among smokers. After adjustment for smoking, age, sex, BMI, cholesterol, and hypertension, daily vapers had a 55% elevated risk compared with nonusers (P<0.05).

From a public health standpoint, “if there are going to be any interventions done to reduce e-cigarette use in our population, then I think we’re going to have to look at those emotional problems that are concurrent with the use of e-cigarettes,” commented ACC press briefing moderator Salim Virani, MD, PhD, of Baylor College of Medicine in Houston and chair of the ACC Prevention of Cardiovascular Disease Council.

Additional limitations included potential for recall bias from self-reported data, fairly little detail in the definition of e-cigarette usage and its amount and duration, the possibility that MI and other cardiovascular morbidity predated e-cigarette use, and inability to expand the logistic regression beyond six main cardiovascular risk factors.